Legia Warsaw Display Huge Tifo Having A Dig At UEFA

You are here:
Champions LeagueFootball

During a two nil win over Kazakh side Aktobe which sees them qualify for the Europa League group stages, Legia Warsaw, still pretty pissed at UEFA’s decision to award a 3 – 0 loss to them after they accidentally fielded an ineligible player whilst cruising to a 6 – 1 aggregate victory over Celtic, which in turn allowed Celtic to qualify for the next round on the away goals rule, decided to unfurl a fantastic Tifo to make their point known (again) at FIFA.

The banner came down with a giant pig holding up a piece of paper saying 6<1 with the words Because Football Doesn't Matter. Money Does and UEFA around the pigs heads. Football in the colours of Legia Warsaw and money in the hoops of Celtic. Then we had the obligatory flares going off around the banner of course - which no brilliant tifo should be without! Of course, it was a little harsh on Legia, who did indeed batter Celtic, and I'm sure most Celtic fans agreed, but the rules have been put in place for years regarding fielding ineligible players and automatic 3 -0 losses. Had Legia Warsaw scored 1 more goal on any one of the legs, then none of this would have even been being discussed, as Legia would have still gone through 5 - 4 on aggregate. Marta Ostrowska, the woman responsible for the initial blunder that ended up with suspended player Bartosz Bereszynski playing the last five minutes of the second game against Celtic, has since been sacked from her post at Legia. She has also received death threats from disgruntled fans and been advised by police to leave the Polish capital for her own safety.

Saying that, had a team like Real Madrid, Barcelona or Manchester City been in exactly the same situation as Legia Warsaw – would we have seen the same outcome by UEFA? I’m not one to second guess one of the biggest footballing organisations in the world, but I suspect they would have got a slap on the wrists and a fine – but what do I know?

I wonder whats going to happen if Celtic and Legia Warsaw meet each other along the way in the Europa League? 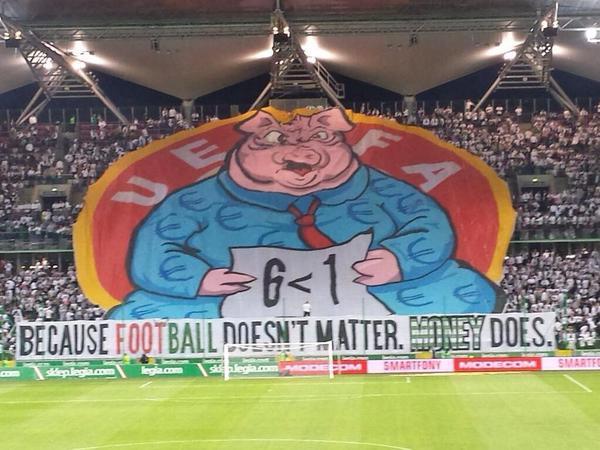