Real Madrid Launch Third Kit – Has A Dragon On It

Real Madrid and Adidas had their official kit launch for their third kit for the upcoming season yesterday. The kit was designed by Yoko Ono lookalike Yohji Yamamoto, is an all black kit and includes a dragon across the front. The goalkeeper kit is an all orange number.

Here’s the sell from the club: Designed with the innovative Adizero™, the black shirt ensures maximum performance and its ultra-light fabric allows freedom of movement and comfort without compromising on elasticity and durability. The two mythical beasts in white that appear interweaved on the torso are striking. One is the dragon king, a symbol of the greatness, glory and power of the club, while the bird dragon, which is an animal capable of adapting to the most hostile situations, represents the resilience, determination and ability of this centuries-old club on its path to victory.

It’s innovative yet simple. I’m certain people will like it and hopefully the dragon will give us plenty of strength ~Xabi Alonso

Below you can see the new kit being modelled by some of the current crop of Real Madrid stars. From left to right: Xabi Alonso, Gareth Bale, Iker Casillas, Marcelo & James Rodriguez. Sandwiched in between Casillas and Marcelo is the designer Yohji Yamamoto. 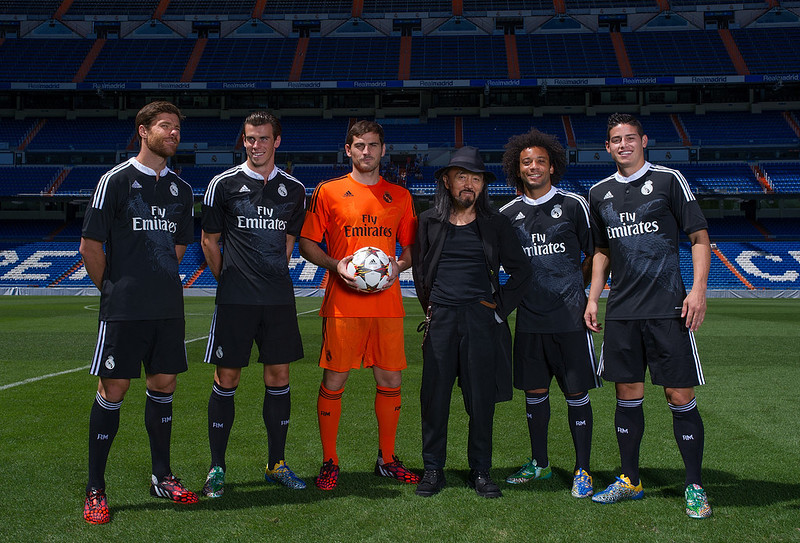