Radamael Falcao, currently plying his trade for Monaco (though he was left out of the team that drew with Lille), tweeted that it was a dream come true to be joining Real Madrid. Shortly afterwards the tweet was deleted and another tweet that said: “Tengo que desmentir una noticia sobre un tweet que no he hecho y que es un foto montaje.” which roughly translates as: “I have to refute a story about a tweet I have not done and that is a photo montage.”

There are stories in this weekends papers and doing the rounds on Twitter yesterday that Manchester City were about to sanction a move for the Colombian hitman, with Arsenal and Liverpool having already been linked with Radamael Falcao throughout the transfer window.

Lets all remember to look surprised and shocked when it’s officially announced that Radamael Falcao is announced as a Real Madrid player!

Unfortunately, in this day and age of the world wide internet, tweets get tweeted very quickly when you have lots of followers, and websites like favstar manage to cache them very quickly even if you do delete them, so you can go can check out the original tweet here, or you can look at the picture below. 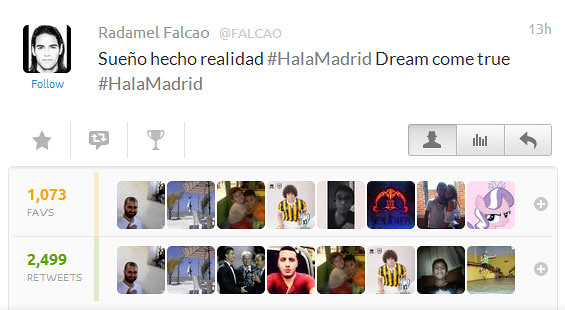