When it comes to people inking their bodies, I can’t really pass judgement as I have some ridiculous tattoos on my body. Needless to day, Twitter user @Jordan_Coombe is suggesting that he has had this “Suarez was ere” work of art inked onto his shoulder… 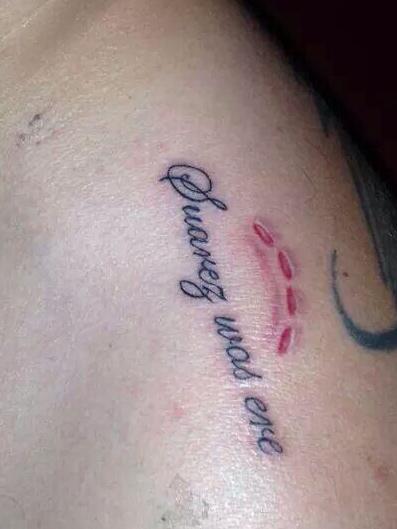 I have to admit, its rather more impressive than that god awful Silence of the Lambs attempt that was knocking around on the internet not so long ago, so he can have a pat on the shoulder from me, but he still has to live with it for the rest of his life, and whats he going to do when Suarez bites someone for a fourth time and a fifth time – and where’s the tattoo’s to mark the occasions where he bit Otman Bakkal of PSV Eindhoven or Branislav Ivanovic of Chelsea?